I sat with my son in Primary today. He wouldn’t go in by himself, because his teacher wasn’t there. So I sat with him, and so I was there when the Primary President said, “We’re going to do a Nativity at the Ward Party… one of you will be able to dress up as Mary, and one of you can be Joseph…”

My son, who has been fairly uninvolved up until this point, then speaks:

The words every mother is longing to hear. We just finished a game of Pokémon (in which he wailed on me with Pikachu’s 50 HP Volt Tackle…) and he said, “I have to go to the bathroom…”

I picked up my laptop to poke around on the internet, check my email, and then he makes his diarrhea announcement. Up I go, to help take care of the mess… and I hear these words in my head:

It’s true. It really is.

Speaking of Pikachu… here’s a photo from Halloween: 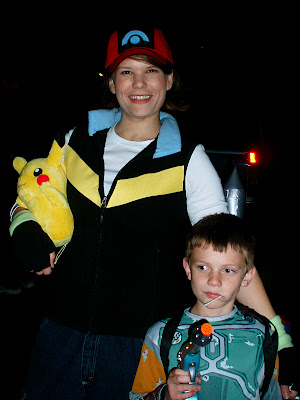 I went shopping today, as is my annual tradition. Mom & I go every year. We get up at crack-o-dawn, hit the sales, get breakfast at McDonald’s, then hit more sales. Those are the most important pieces of my Black Friday puzzle. This year was a bit more intense than usual, because we went with a friend who wanted to be in line at Wal-Mart at 4:30 a.m. to buy a Nintendo DS for her son.

Yes, that’s right. I got up, showered, dressed, and was in line at the Placerville Wal-Mart at 4:30 in the morning. This was a bit of a stretch for me. It seems like in the past we’ve hit mostly the 6 a.m. sales, maybe a few 5 a.m. sales, but I don’t recall being in line at 4:30 any time in recent years.

Was it madness? Most definitely. But there was a strange feeling of power in getting to the back of the store while there was still a pile of Nintendo Wiis, there for the taking, at the lowest price I’ve ever seen. I didn’t buy. I just looked, and thought, “Huh.”

In these modern times, we don’t hunt much. I think something about the day-after-Thanksgiving sales taps into that primal urge to HUNT. GO FASTER. PUSH PAST THE OTHERS. MOVE IN FOR THE KILL.

The other notable event of the day: I met them. The people who want “fullscreen” editions of their movies. Two different stores had “The Devil Wears Prada” for sale at an insanely low price. I enjoyed that movie, and I would have bought a copy, except that ALL of the copies at both stores were fullscreen. I don’t buy fullscreen movies. I stood there, looking at the DVDs, thinking, “Who ARE these people that buy fullscreen?” If I buy a movie, I want to see the WHOLE movie, thanks much. Then, as though summoned by my consternation, they appeared. A man in overalls, and his wife in a sweatshirt.

Woman (to her husband): “Make sure you get the FULLSCREEN one, Harold*.”

Harold then dutifully checks to make sure the DVD he is holding is, in fact, the fullscreen edition. A minute passes.

“Yeah, pretty much. Well… isn’t the fullscreen the one that fills up the whole TV?”

“And the widescreen has those black bars?”

“I hate those bars.”

“Really? See, I was just here wondering why anyone would buy the fullscreen edition, because I always buy widescreen.”

“Well, what’s the difference, other than those bars?”

“Well, see – if they fill up your whole screen, then they have to cut off the sides of the film, so you don’t get to see the whole thing.”

“Oh. I guess I never thought about it.”

“Well, it don’t make much of a difference, though – really.”

So. There they were. The people that genuinely prefer, and are driving the market for… fullscreen movies. I don’t understand them, but I know that they exist, because now I’ve seen them with my own eyes.

Overall: A+++ WOULD SHOP AGAIN.

*not his real name.

*Post updated (twice) with this link and this link for those interested in learning more about widescreen vs. pan-and-scan.

I really am thankful, too. I was about to write a big, long list of all the things I’m thankful for – but there’s so many that it starts to sound trite… and it’s not. I’m really sincere when I say, “I am thankful for clean, hot water that comes out of a pipe on my wall.” Incredible. Out of all the billions of people who have lived on this earth, I live in this crazy narrow subsection of the population who has clean, hot water that comes out of a pipe on the wall. I have clean, hot water whenever I want it… and also pretty much everything else I want. I can eat fresh fruits from all over the world, whenever I want them. My corner grocery store has an array of spices that would have shocked people from the Middle Ages. I can buy saffron. (Did I ever tell you about the dream I had once? I stole some saffron out of a store… I cut open a tennis ball and hid it in there. I was a saffron smuggler.)

Anyway. These things are not lost on me. I am thankful for the food, and the spices. The water, the soft bed. Thankful for the people I have in my life that I get to share these things with. Happy Thanksgiving, all.

Also: In anticipation of Black Friday… a video for you.

I made a pie tonight. I don’t normally really like pie… but I really like chocolate. So when my mom asked, “What kind of pie do you want?” instead of saying, “I don’t care,” like I usually do, I said… “I really like French Silk pie.” She said, “Well why don’t we make one?”

Baker’s Square has this awesome chocolate pie – the French Silk pie. I remember eating this pie when I was around 15 years old and just having this experience with it. It was not chunky and unrefined, like the other pies that were hardly worth eating. This pie was sophisticated and lovely. It melted on my tongue. I remember the crust and the chocolate curls on top, but most of all I remember the smoothness and the flavor. Mom found a recipe on the internet – it was amazingly simple. Sugar, butter, vanilla, baking chocolate (melted), and eggs. (I used Egg Beaters because they’re pasteurized).

So what if I had to go to the store a second time on the day before Thanksgiving… I get to eat a French Silk pie tomorrow.