This post is about Friday, even thought it’s Saturday now. Friday I woke up, cleaned up, got dressed, got breakfast. Then I woke the boy up, got the boy cleaned up, dressed the boy, and got the boy breakfast. Then, against his protests, I took the boy to school. I went to work. Logged in, started answering emails and voicemails. Everything at the beginning of my day was fairly standard.

The middle of my day was full of people asking me for help, desperate to beat the deadline and unable to fight the battle with the computer without expert assistance. I reached my peak stress level at 4:00, when I had a phone call from someone who must have just needed to vent, and decided to do so for 20 minutes in my general direction.

Then, sometime after 6 pm, after picking up the babysitter, Weston & I drove to Lodi to see a Glen Phillips show. We stopped by Long John Silver’s, and had exactly 5 minutes to eat our food in the parking lot before going in. I’m glad we ate fast (even though it also made me sad, because if I’m going to eat battered, fried, delectable fish, I’d like to sit and enjoy it), because the show started nearly on time.

It was in the Hutchins Street Theater, which is this marvelous (and inexplicable) theater in the middle of Lodi. There are these light fixtures on the wall – inverted triangles with brushed glass and sculpted metal vines wrapping around – beautiful. There’s also a large display of yo-yos in the hallway. Apparently, sometime last month, they set a record in there for the most people using miniature yo-yos at the same time (408?).

Anyway, when we walked in, Glen was just starting. We picked some seats on the side, instead of crawling all over people to get to our assigned seats in the middle, and I have to say, I could not have been happier with the experience. The sound was great. Glen’s voice were clear and lovely, ringing through the whole room, which was utterly quiet (in a respectful and friendly way, not a sad and empty way). Glen talked quite a bit – which I really enjoyed. He also made the audience sing a bit – which I also really enjoyed. I thought to myself, sometime during the show, “I’m glad he writes music.” It probably comes at some (not small) personal cost though. Being a professional musician is one of those things that people think would just be fun and games and it probably is fun sometimes, but there’s also a lot of pressure and being away from your family and adding up the money and trying to make things work. So I thought to myself, “I’m glad he writes music,” and I guess what I meant was, “I’m glad he pays the price, so I can enjoy this music.”

Other things I thought during (or about) the show:

The air is changing. The rain is coming. Soon.

Also known as: The second week in a row we didn’t make it to the waterfall.

Although this weekend, at least we FOUND the waterfall. We just didn’t make it to the top like I thought we might. Due to a variety of technical difficulties, we had a late start, and due to some time constraints and shoe difficulties, we thought it wise to stop and sit with our feet in the pool rather than press on. And actually, I’m really happy with the way that worked out. I’ve been to the top of the falls several times – but I’ve never sat down in any of the the cool pools. We had roast beef sandwiches and pringles and enjoyed the hot sun and the icy cold water. It was a good hike.

The pool we sat in: 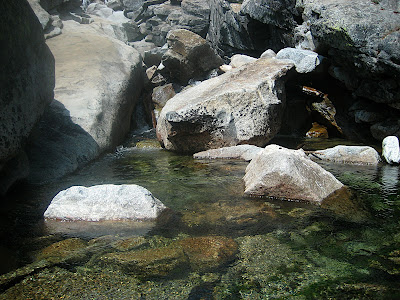 View from where I sat: 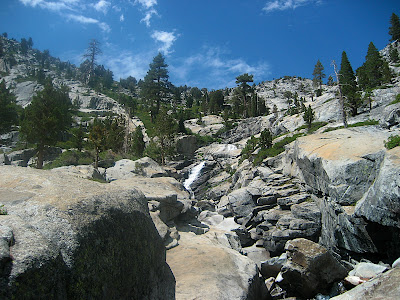 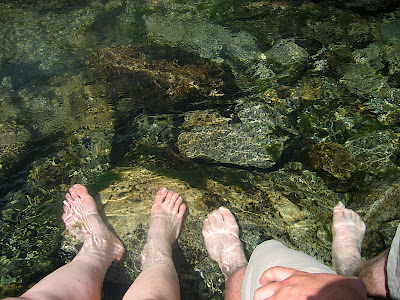 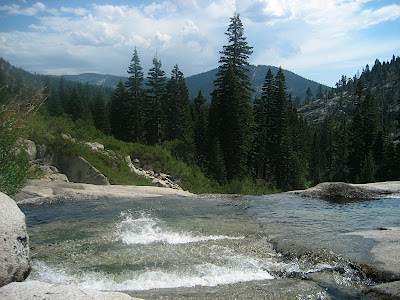 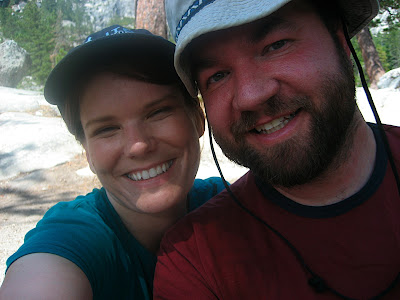 Later on that day, I had to drive to the airport and pick up Connor. It was good I had some time to enjoy the open air on the mountainside yesterday, because today has been difficult. Sigh.

Weston & I decided to get away for the weekend. We wanted to go to Ojai, CA. He used to live there, and I wanted to visit… so we thought we’d hop in the car around 4:30 after work, stop somewhere and pick up food & gas, and be at the Best Western Casa Ojai by midnight, no problem. Wrong. We started our trip late, because neither of us left work on time. We weren’t able to get away until almost 6:00, so we were feeling antsy and wanted to get on the road FAST. We decided to stop in Stockton and pick up the food and gas, and we settled on RedBrick pizza (VERY tasty thai chicken pizza), picked up the pizzas to go, and got back on the road. (The clever observer will notice a small – but important – detail at this point.) We had some nice conversations, ate our delicious pizza, and were cruising merrily along on southbound I-5 (if you would like to see approximately where, just type “panoche junction” into teh googlemaps) when the car did something funny.

The needle on the speedometer was going down, down, down, and I was pushing on the gas pedal, trying to get it to go back up when Weston made an observation. “Um… We’re out of gas.”

It was a small mistake. One minor oversight. But it took us 3 hours to correct it. See, in order to call for roadside assistance, you have to know where you are. We didn’t have any idea. A nice trucker stopped by and tried to help us while we were walking to find a mile marker. I couldn’t understand him very well, but Weston figured out what he was trying to tell us. We went back to the car and called for help.

At 4:30 a.m., we pulled in to the Best Western, which was as welcome a sight as I’ve ever, ever seen. The hotel is lovely. Everything was ready for us. We slept, and now we’re off to wander Ojai. We’re going to visit the ice cream shop – I’ve heard Julia Ormond gets her ice cream there. But today, I will be paying attention to the small things. Sometimes they’re important.